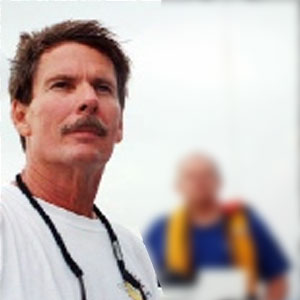 In 2001, I was sailing on board the 125 ft maxi catamaran, PlayStation, attempting to break the sailing world record, “The Route of Discovery” This sailing route started in Cadiz, Spain, passed through the Canary islands and ended in San Salvador, the Bahamas, Just before departing Cadiz, I received an e mail from good friend Tim Ainley. Tim said, “You guys are sailing to the wrong island, you need to steer for Grand Turk, Turks and Caicos!” In the end, we did break this world sailing record by about a day and a half. (Ironically, I was reading James Michener’s “Caribbean” while crossing the Atlantic, this has a section on the arrival of Columbus)

Now, when this opportunity to follow the wake of Columbus arose, it didn’t take Tim long to enlist me. I look forward to meeting Si and hearing more of the details surrounding his theory on this different first landing and route.

During the 1980’s and early 1990’s, David raced windsurfing competitions and won numerous championships, including two national and one world title. For the last 14 years, he has won 12 national titles in multihull,trimaran sails racing classes, all with sails of his design. Today, Calvert Sails is one of the top multihull sail lofts in the United States with numerous wins in every region on the United States and Caribbean.

Dave became crew of the 125 ft. mega catamaran, PlayStation. During 2001 and 2002, he was onboard as a driver and helped to set five w orld records including both Trans Atlantic records and the 24 hour speed record. The Route of Discovery Playstation’s Crew Photos. In addition to Dave’s racing history, he is an avid cruiser. When not designing sails or competing in major events, Dave cruises with wife Trish on “Destiny”, their Fountaine Pajot Belize 43 catamaran. With a home in the south Bahamas, Dave and Trish spend parts of each year sailing between Florida, the Bahamas and the Caribbean. Over 60,000 miles in cruising and racing offshore as well as record ocean crossings, has given enough first hand experience to design and build blue water cruising sails to go the distance. 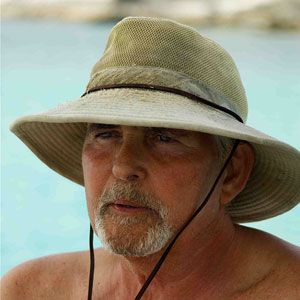 In 1989, James E. Kelley, Jr. and Oliver Dunn published their transcription and translation of The Diario of Christopher Columbus’s First Voyage to America 1492-1493. Dr. Dunn translated several passages of the Diario to accord with the hypothesis that Columbus first landed at the Island of Watlings/San Salvador in the Bahamas, a distinction asserted in a 1987 political accomodation to which 28 nations were signatories. However, by 1992, it had become evident that the Watlings’San Salvador hypothesis suffered from too many flaws to merit serious consideration as Columbus’s island of landfall and disembarkment.

For me the purpose of the 2014 Following Columbus Expedition is to test at once my own translation of folios 8 through 17 of the Diario and the theory that in 1492 Christopher Columbus first disembarked on the Island of Grand Turk. By actually sailing the route from Grand Turk to the Ragged Islands proposed in the theory, and arriving in good order at all its nine secure anchorages, we should have an experimentally confirmed case for justifying corrections to Dr. Dunn’s translation, and for corroborating a first landing at the Island of Grand Turk.

Born in 1945 in Washington, DC, Josiah is an American citizen resident in France. The son of a diplomat, Josiah had already visited various European capitals with his parents before beginning grade school in Delaware. As a teenager he was privileged to spend time with distinguished houseguests such as physicists Nils Bohr and Robert Oppenheimer, Julian Hill, chemist co-inventor of nylon, John O’Hara, the writer, and the effervescent actress, Barbara Bel Geddes, who, much later, went on to play JR’s mother in Dallas. At university, Josiah studied mathematics, physics, history of science, European languages, renaissance literature, Arabic, and Hebrew. He speaks French and English; reads Portuguese, Spanish, Italian, Latin, Ancient Greek, Classical Arabic, and Ancient Hebrew. He has translated poetry from the Sanskrit, German, Catalan, and Breton. His great and intricate fascination is the puzzle of Columbus’s first landfall.

After a fatiguing and lucrative career on Wall Street, Josiah, seeking quiet, moved to the Turks and Caicos Islands in 1986. He was named an official historian of the Islands by H. E. Governor Michael Bradley in 1989, and appointed advisor to various Chief Ministers on matters relating to the early history of the territory. He cofounded the Islands’ first television production studio and for many years, after the example of Socrates, tutored Island High School children.

He currently lives in Paris with his wife and daughter and summers on Salt Cay. 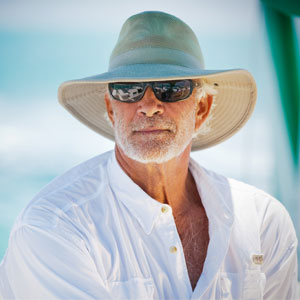 I have been interested in the Columbus Landfall mystery for many years and have in fact sailed in to most of the proposed landfall islands.

In 1987 I met Josiah Marvel and have been working closely with him ever since in an ongoing dialogue between an historian and a sea captain. Josiah has always been ready to test his theories against the real experiences of a local mariner and I believe that is just another reason to respect his work.

I believe that Josiah’s work is too important to be ignored and have mounted this expedition to help to bring the worlds attention to the vast study of the subject to which Josiah has dedicated his life for the last 30 years.

From my own experience there is more compelling evidence for a Grant Turk landfall than any other proposed island. It is in sailing his route from the Grand Turk through the lower Bahamas to Ragged Island that we hope to add further evidence to a Grand Turk Landfall and finally solve this fascinating mystery.

Born in 1951. Tim built and sailed BELUGA to the Turks and Caicos Islands in 1985. Ask him about “the old days” and he’ll share some of the history of Provo with you. (We call our home Provo because Providenciales is such a mouth full!) Ask him about his friend JoJo the dolphin and you’ll have to ask him to stop when you’ve had enough. Ask him to take you sailing and he can’t help teaching your children how it works because Tim’s love of sailing started as a child with his Dad. Ever since he has been designing, building and sailing boats. Trained in boatbuilding and Search and Rescue by the RNLI off the coast of Wales, Tim learned to love the ocean and went home to build his own catamaran. BELUGA was launched in 1982 and in 1983 Tim was asked to build the 80 foot racing catamaran, FORMULE TAG, with Nigel Irens. She would go on to break the Round the World record in 1994 as ENZA NEW ZEALAND under the late Sir Peter Blake. Long gone by then, Tim had sailed away. He found paradise in the Turks and Caicos Islands and is looking forward to sharing it with you. 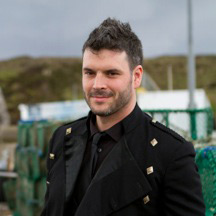 Having started his career as a Camera operator and editor before becoming a director, Douglas has worked for every major studio and network in the US, including HBO, Sony, Fox, Warner Bros, Discovery, CBS and NBC/Universal. He is thrilled to be taking part in this quest to rewrite history. 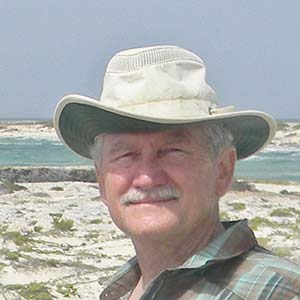 Mayaguana and the islands of the south-central Bahamas* appear to have been positioned at the juncture of two routes for prehistoric visitation, settlement, adaptation and culture sharing by Arawakan speakers. This research effort is intended to expand archaeological information on the prehistoric populations in the zone with the intent of enhancing our understanding of regional migration and settlement; as well as economic and social interaction. The research will contribute to a higher fidelity interpretation of the cultural record of the area, to include possible proto-historic Lucyan Arawak sites which may show evidence of early contact with the Spanish. Previous archaeological investigations indicate that the Lucayans are likely to have been well established on Mayaguana and throughout the south-central Bahamas at the time of European contact.

The current archaeological and ethno-historic linguistic records suggest that the central and northern Bahamas were subject to visitation and settlement by Ciboney Taino speakers, linked to Arawak populations of northern Cuba and Western Hispaniola, while the nearby Turks and Caicos were more directly settled by Classic Taino speakers and culture bearers from Hispaniola. Early populations in the area, probably seasonal visitors, referred to as Meillacans, utilized Meillacoid style ceramics; and, after a period of overlap, were supplanted by locally adapted and permanently settled Arawak speakers, referred to as Lucayans. The Lucayans made ceramics from local materials, to include classic Palmetto Ware and variants Crooked Island Ware and Abaco Red Ware.

Inter-island trade and intermarriage between the Arawak speaking populations in the Bahamas and Turks and Caicos Islands, and beyond — to Cuba, Hispaniola and possibly to Puerto Rico—all are likely to have contributed to the flow of people and the sharing of cultural traits reflected in the archaeological resources of the south and central Bahamas. The proposed research is intended as a contributor to documenting and understanding these processes, and to provide an enhanced understanding of the cultural heritage of the Bahamas.

Shaun Sullivan is an archeologist, specializing in Taino Arawak prehistoric cultures in the norther Caribbean, with particular focus on Taino/Lucayan visitation, settlement and adaptation in the Bahamas and Turks and Caicos Islands.

Prehistoric Patterns of Exploitation and Colonization of the Turks and Caicos Islands:

Asto-Archaeology of a Complex Lucayan Site (MC-6,) in the Classic Taino Tradition

I shall be pleased to contribute to the “An Evening with Christopher Columbus” gathering. 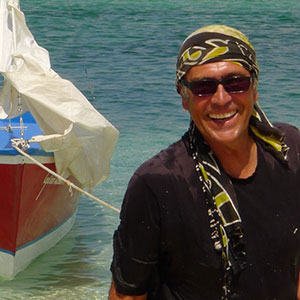 Christopher Columbus, we have good reason to believe, first landed on Grand Turk in 1492. It took me a while longer to get there. I first landed on Grand Turk in a Pan Am jet in 1986, on assignment for The Daily Telegraph of London, the newspaper which has been home to me for most of my career. There was a spot of bother on the Turks and Caicos, to do with cocaine and the unfortunate arrests in Miami of local politicians, and the Foreign Editor was convinced I would be bearing witness to an invasion by the Royal Navy bent on restoring order. Instead I found tiny islands steeped in history and swathed in magical charm and, for reasons it has taken decades to understand, I felt utterly at home.
It was another 20 years or so before I met Josiah Marvel, on Salt Cay, where he had lived for many years, and I had bought a cottage. It seemed an unlikely place to meet a scholar, but also, of course, a place where you never know whom you might meet.
We have spent uncountable hours talking of Descartes, Epicurus and Demokritus, whom he can read in the original Greek and I cannot. And many more talking of Columbus and Josiah’s dogged pursuit of the clues to what exactly he saw in those momentous days at the end of his voyage of discovery, and exactly where he saw it.
It is wonderful to be joining this second expedition of the Destiny in the quest for the last word on Columbus theory, evidence beyond reasonable doubt that the Admiral did indeed set first foot on Grand Turk.
It is also wonderful to be joining Josiah and Captain Tim Ainley on such a voyage as this. Tim has ventured to sea in my own modest sailing craft, The Captain Haddock, hand built in a backyard on Salt Cay, thus proving his courage, his skill and his generosity in devoting his time and expertise to an amateur in the craft in which he so excels.
Avast! Up anchor! We sail in the spirit and in the company of great and unique men, and we will have great tales to tell.

Born in London in 1950 and educated in England, Charles Laurence is a former foreign correspondent for The Daily Telegraph of London who covered conflicts ranging from the Falklands War to the Middle East, India, and Afghanistan before heading the paper’s New York bureau. Now an American citizen, he continues to write for British media and lives in Woodstock, New York and on Salt Cay.