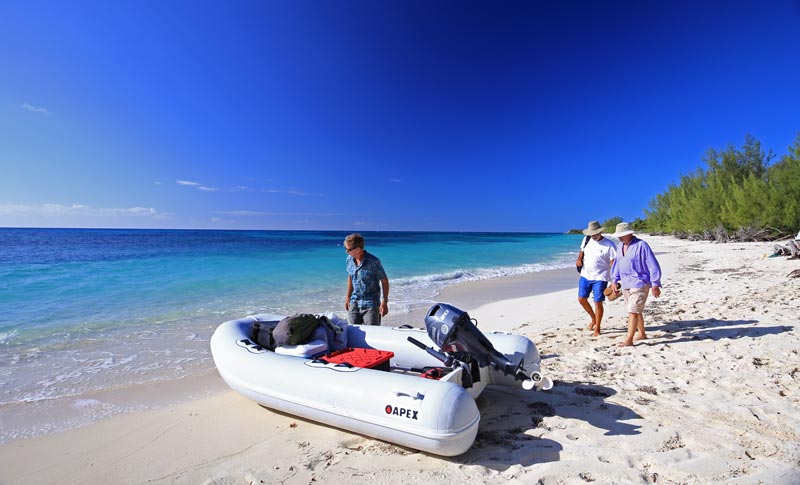 Departed Cat Island this morning about 10:00 AM after carrying Douglas Rath, our film director, to the airport for his return trip to London. He delighted us by saying that he had enough footage to persuade potential investors to fund a full-length production on our work. 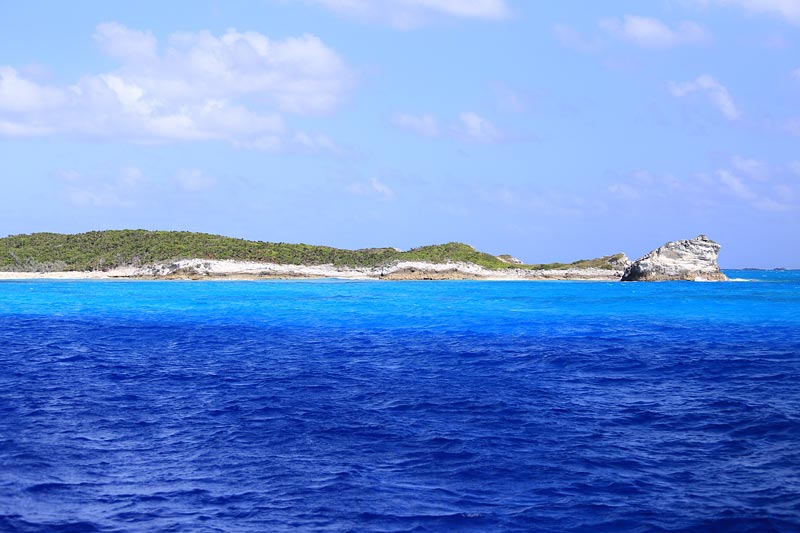 Passing Conception Island on its South Side by Wedge Point 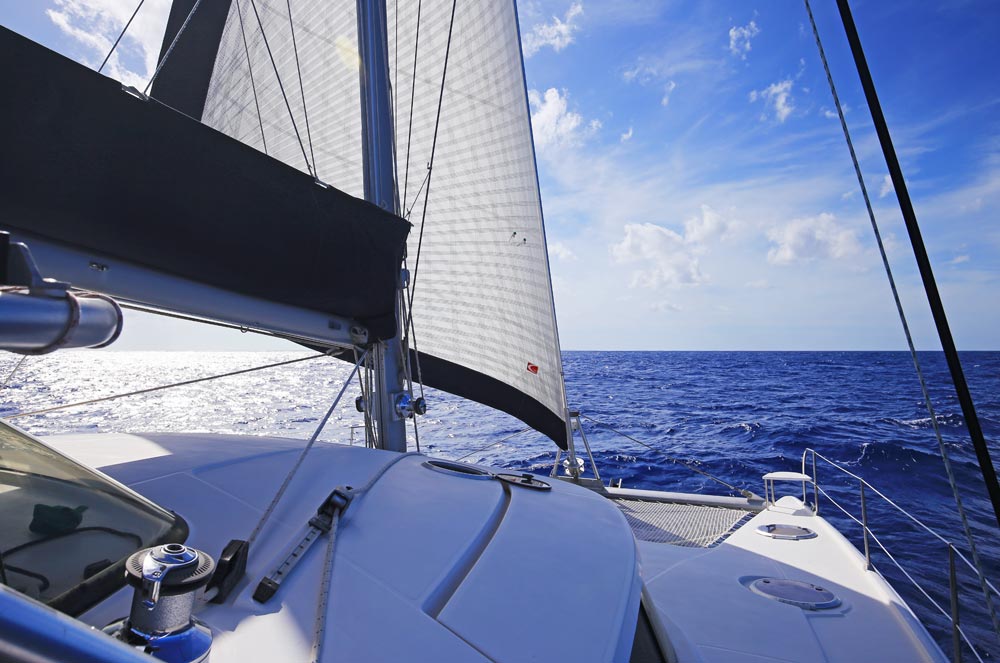 Conception Island’s name dates from between the late eighteenth century and 1926, when Cat Island was known as San Salvador and historians believed (contrary to the description in Columbus’s logbook, the Diario) that Conception Island was the second island he landed at and named Santa María de la Concepción. In 1856, Captain A. B. Becher of London published the first book entirely dedicated to Columbus’s first landing in which he confirmed the 1793 opinion of Don Juan Bautista Muñoz, identifying Watlings Island as San Salvador without explanation. Endeavouring to reconcile actuality with his understanding of Columbus’s second island, Becher curiously chose to confer the name Santa María de la Concepción upon two islands. Rum Cay proved resistant to receiving a new name and Conception Island already owed its name to the discredited Cat Island hypothesis. But Captain Becher is the cause of how the northern end of Long Island became Cape Santa Maria.

When Columbus departed his first island which he named San Salvador late in the afternoon of 14 October, he noted seeing before dusk so many islands that he knew not to which he should go first. He headed toward the largest and before nightfall hove-to. Columbus’s log of 15 October follows below and anyone interested in studying the original Castilian is referred to the transcription and translation I’ve appended to this website. In his 1963 translation of the Diario, Admiral Morison observes the following in a note to Columbus’s seeing many islands:

This statement misled earlier historians into the belief that Columbus’s landfall was in an archipelago like the Turks Islands. It is true that you can sail for miles W of San Salvador without seeing more than one island, but [Rudolph] Cronau pointed out (Discovery of America and the Landfall of Christopher Columbus …, New York, [1892 in German] 1921, 29-31) that the numerous low hills of these long Bahamian cays look like strings of separate islands when the shoreline is below the horizon. Ten miles SW of San Salvador, according to my own observations, Rum Cay looks like six separate islands. 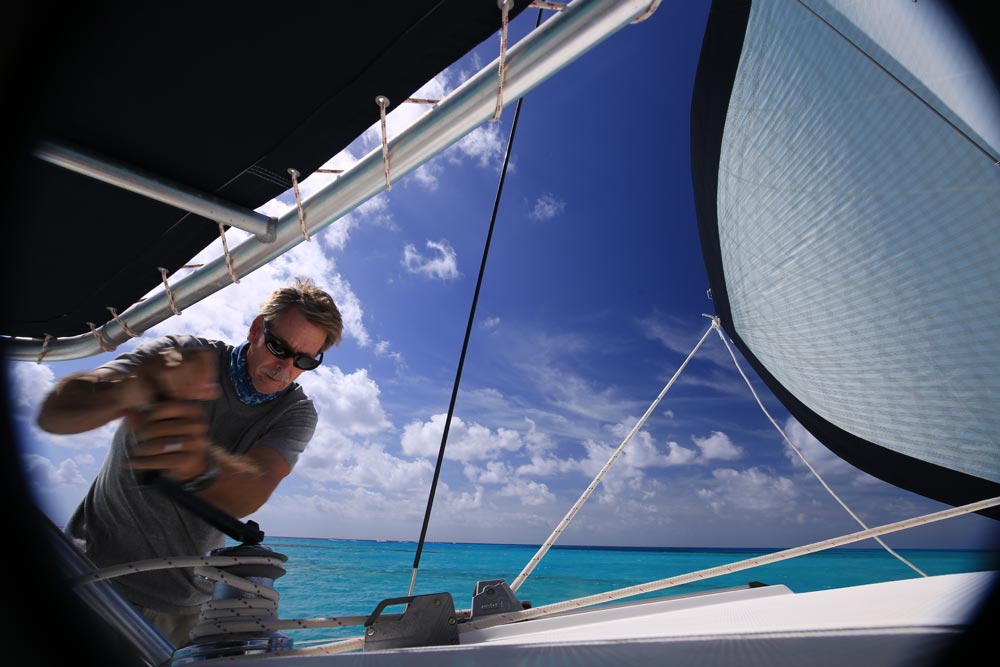 This is pulling reality by the hair! Both our captains object! Experienced mariners without an issue to defend easily can tell the difference between hills on an island and a group of spread-out islands. Of these Columbus observed that: [I] saw so many islands that I knew not how to resolve to which I should go first.

And those men whom I had had taken were telling me by signs that they were so so many that there was no number. Clearly these are more than six close islands.

Admiral Morison posited that Columbus anchored the night of 16 October just east of Rum Cay’s southwest Sandy Point, an anchorage that our two captains agree conforms with the requirements for fifteenth-century vessels; it lies off a shore protected from the prevailing wind, it is not confined permitting a quick departure if necessary, and it offers a clear sandy bottom. Let’s note what Columbus wrote:

I had kept to weather this night with fear [wishing] not to approach land to anchor before the morning for not knowing if the coast was clear of shoals, and on day breaking to charge sails, Monday, 15th October and as the Island were farther than five leagues, rather probably seven, and the tide* detained me, it was about midday when I approached the said Island and found that the face which is on the side of the Island of San salvador runs north south and in it there are 5 leagues, and the other that I followed was running east west, and in it there are more than ten leagues. And as from this island I saw another larger** one to the west, I charged the sails to go all that day until night, because still I might not have been able to have gone to the western cape, to which island I gave the name la Isla de Santa maria de la concepcion and almost at sunset I anchored nearby the said Cape to know if there was gold there, because these [Indians] whom I had had taken on the Island of San Salvador were telling me that there they wore large bracelets of gold on the legs and arms. I well believed that all that they were saying was deceit in order to flee. Withal, my will was not to pass by any Island of which I might take possession, although having taken of one, it can be said of all. And I anchored and was until today tuesday, when on day breaking I went to land with the armed barks, and went out and they who were many also naked and of the same condition of the other Island of San Salvador let us go through the island and gave us what I asked of them. And because the wind was charging southeast toward shore, I did not wish to tarry and departed for the flagship, and one large dugout was alongside the caravel niña. And one of the men of the Island of San salvador who was on her, dove into the sea and went off in it. And [because] the night before at mid[night] the other [Indian] having dived, [my crew] went after the dugout, which fled as never there was a bark that might be able to overtake it, although we were making great headway on it. Withal, it made land and they abandoned it, and some of them of my company went out ashore after them, and they all fled like chickens. And the dugout that they had abandoned we brought alongside the Caravel niña whereto already from another cape another small dugout was coming with one man who was coming to barter a clew of cotton, and some sailors dove into the sea, because he wished not to enter into the Caravel, and took him, and I, who was at the poop of the flagship, who saw all, sent for him and gave him a Red bonnet and some small Beads of green glass which I put on his arm, and two cascabels which I put on his ears, and ordered his dugout returned to him, which as well [my crew] on the bark was holding and sent him to land. And presently I set sail to go to the other large island that I was seeing to the west. And I ordered cast off as well the other dugout that the caravel la niña was carrying astern. And afterward I looked ashore at the time of the arrival of the other [Indian] to whom I had given the things abovesaid and from whom I hadn’t wished to take the clew of cotton, although he was wishing to give it to me.

We note that Columbus states that the second island has a face on the side of San Salvador running north-south five leagues (13 nautical miles) long and the part that runs east-west is reckoned to be 10 leagues long (27 nautical miles) by midday and in order to reach the western end of this coast Columbus “charged the sails to go all that day until night.” This indicates that the east-west coast was about 50 nautical miles long. 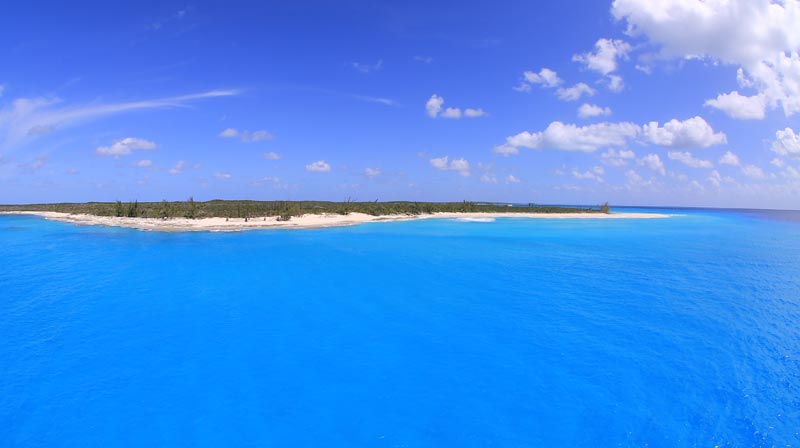 Moreover, Columbus twice notes that he sees a larger or higher island to the west. Last night Gabriel ascended our mast in a bosun’s chair to a height of fifty feet (the height of the crow’s nest on the Santa Maria) to see if either Conception Island or the north end of Long Island was visible at respective distances from Morrison’s anchorage of 13.6 and 18.5 nautical miles. Conception, visible in clear weather, lies to the north-northwest of this anchorage and Burnt Ground on Long Island lies due west of it. Gabriel could not see Long Island. But we shall try again before we leave Rum Cay. 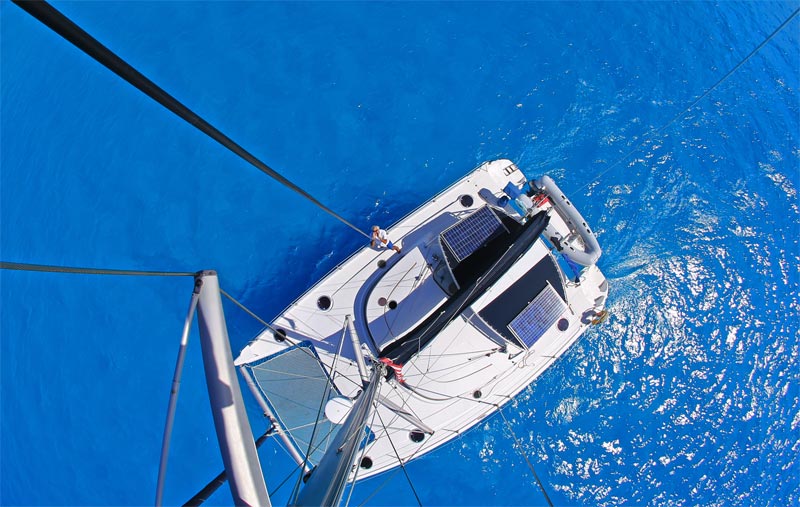 Destiny II seen from the height of the Santa Maria’s crow’s nest.