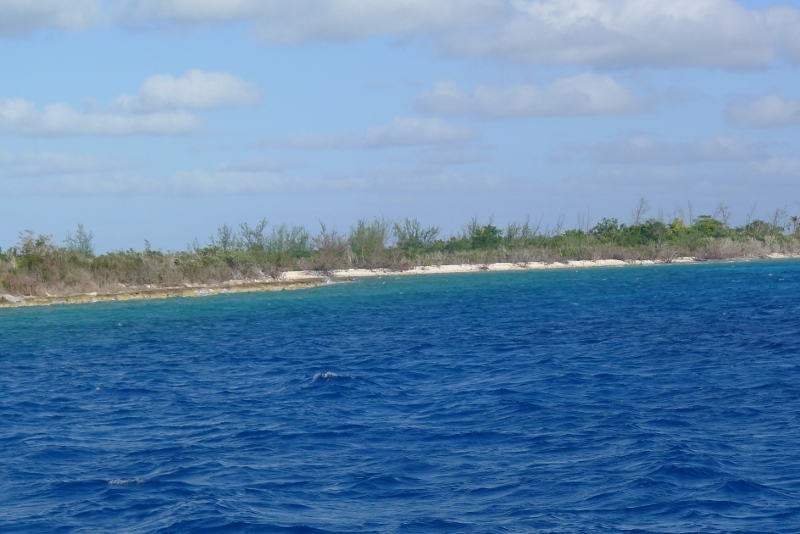 On Arriving at the Northwest Point of Great Inagua on Monday, Dec 7, we had enough time to explore Man of War Bay from the water. The wind was unsuitable for an anchorage here, but we observed the entry to a creek running up to the north west. This was interesting because Columbus described such a creek which persuaded him that he had anchored off an island separate from the cape behind, a cape which he thought was itself also separated by water from Great Inagua, his fourth island.

We raised our photographer, Marlon Krieger, up the mast of Destiny II in a bosun’s chair to the second set of spreaders, about 40 feet above the water level. This is about ten feet shy of the height we estimate for Columbus’ crow’s nest. Marlon reported seeing the water of Alfred Sound, but not that of the creek, which although clearly marked on the chart was obscured by vegetation, including a thick stand of palm trees which would not have been there in Columbus’ day.

This offers a very close match to Columbus’ detailed description of his sixth anchorage on October 19th. >From there he had observed : “This here I call Cabo Hermoso – I believe it is an island apart from Saomato and still there is even another small one in between.” (Samato, which he named Isabela.)

This conforms closely with the geography of the north west point of Great Inagua, and there is nothing like it to be found on the island of Long Cay/Fortune Island, the forth island of Central Bahamas landing advocates.

On the next day, we secured a ride into Matthew Town, the only settlement on Great Inagua. We drove a long dirt road through high vegetation leading to industrial salt ponds edged on the seaward side by towering salt heaps, the cash crop of Great Inagua. We were looking at Morton’s solar salt plant, now the second largest in the world, supplying coarse salt for the winter roads and sidewalks of North America.

We hoped to find the green parrots which had caught Columbus’ eye. He had seen flocks which had obscured the sun. Numerous residents of Matthew Town informed us that the parrots had just migrated from their summer quarters in the many ganep trees which line the streets, causing much noise and annoyance. They had completed their harvest of the fruit, and had flown north into the island’s unpeopled interior.

However, Henry Nixon, warden of the National Flamingo Park, did mention that a few late birds might still be around. This prompted Laurence to take a stroll. The noise of three vigilant guard dogs which objected to his presence resulted in a squawk of indignation from above, and from the branches above flew a small parrot bright in two shades of green. He seemed a stout little fellow, his wings flapping at high revs to bear him over the road and into a distant canopy.

We can confirm the presence of at least one Bahamas Inagua parrot. Mr Nixon tells us that there are between 12 and 15 thousand, and that we should come back next August to see all a man would ever want to see of the bird the locals regard as a pest.